This is an Adam Liaw recipe.  I loved this dish so much. My photo isn’t the best but I will be cooking this again soon so hopefully I remember to get a better picture to do the dish justice.

Place the pork on a chopping board and lightly beat with a meat mallet until about 1 cm thin. If using pork chops, carefully beat around the bone.  Mix together all the ingredients for the lemongrass marinade, pour it over the pork and ensure it is well coated. Marinate for at least 30 mins or preferably  overnight.

Heat oil in a frypan over high heat.  seat the pork with salt and pepper and fry for about 2-3 minutes each side, or until cooked through.  Add a little lemongrass marinade a minute or two before you remove the pork to further caramelise in the pan.  Rest the pork for 3 minute in a warm place before serving.

For the nuoc cham sauce, pound the garlic and chilli together in a mortar and pestle to a rough paste. Mix together lime juice, sugar and water and taste – adjusting the sweetness and sourness to taste.  Add the fish sauce a little as you go, until the sauce is savoury but still pleasant, without being overpowered by the fish sauce.  Mix through chill it and garlic paste and set aside until ready to use. 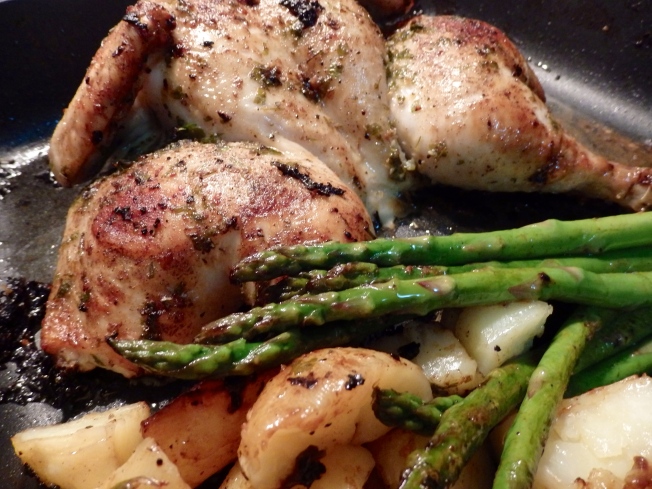 This dish has Moroccan influences. It is full of flavour is great for a Sunday Roast.  I served the chicken with potatoes and asparagus.

Preheat the oven to 220 deg C.  Using kitchen scissors, cut along the backbone of the chicken and then press firmly on the breastbone and flatten it. Place chicken in a baking dish.  In a small bowl mix olive oil, garlic, chopped parsley and salt.  Pour of the chicken and give it a massage ensuring that the marinade covers all of the chicken. Sprinkle black pepper and paprika over the chicken.  Roast for 30 – 40 minutes or until the chicken is cooked through.

A client was telling me that whenever she typed my name into her phone the word devil would pop up.  That might just explain why I loved this sinful indulgence.  Just one tip – make the icing first.  It took a long time to set, and after an hour it was still very runny.  I rather liked the idea of serving it like that but for those that don’t, make the icing first and let it sit. This is a recipe by Annie Bell.  In the coming weeks I will make Nigella’s version just for comparison.

Whisk the cocoa with 200ml boiling water, whisk in the bicarbonate of soda and leave to cook for about 20 minutes.  Preheat the oven to 160 deg fan oven/180 deg electric oven.  Butter or oil two 20 cm non-stick cake tins with removable bases, at least 5cm deep, and line with baking paper.

Whisk together the eggs, sugar and oil in a large bowl until smooth, then stir in the flour, and then the cocoa solution. Pour two-thirds of the mixture into one tin and the a third into the other tin, making sure the mixture is evenly spread.  Give each tin a sharp tap on the work surface to bring up any air bubbles and bake for 40-50 minutes respectively, or until risen and firm and a skewer inserted into the centre  comes out clean.  Run a knife around the edge of  the cakes and leave to cool.

To make the icing, gently melt the chocolate and butter into a bow set over a pan with a  little simmering water in it, stirring until smooth.  At the same time, combine the cocoa, milk and honey in a small saucepan and heat almost to boiling point, whisking until smooth.  Pass the cocoa and milk through  sieve into the bowl with the melted chocolate and whisk to a thick, glossy icing.

Remove the deeper pan cake from the base, peel off the paper and slit into two equal layers using a bread knife.  Place the lower half on a cake stand or plate and spread with a quarter of the icing.  Remove the paper from the smaller cake, lay this on top of the base and spread with another quarter of the icing.  Lay the top layer in place and smooth the remaining icing over the top of the cake, taking it up to the sides and leaving it to drip down.  Set aside for a couple of hours for the icing to set.